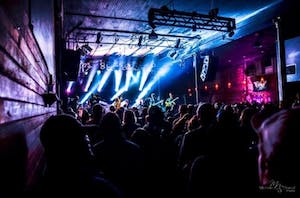 General Admission * Standing Room Only- Any Available Seating Will Be On A Strictly First Come-First Serve Basis * All Ages * Additional $5 Cash Surcharge At The Door For Under 21 * Attendees Under 16 Must Be Accompanied By A Ticketed, Adult Guardian * Posted Times Are Door Times- Events Generally Begin 30-60 Minutes After Doors Open * No Re-Entry

SCREAM OUT LOUD has been writing and performing their music to move the soul since 2009. Living on the edge of the continental USA and in the midst of beach paradise, SCREAM OUT LOUD has cultivated and perfected their sound over the last 7 years. Starting in Pensacola, FL and expanding all over the United States, SCREAM OUT LOUD has toured and performed with contemporary artists like I See Stars, For The Fallen Dreams, Attila, and Memphis May Fire. SCREAM OUT LOUD signed with Indianola Records in 2011 and released their debut LP 'LIVE IT UP' the following year. Supporting their 2012 release, SCREAM OUT LOUD has been DIY touring and performing as much as they possibly could. SCREAM OUT LOUD has recently signed with Luxor Record, went back to the studio again, and are ready to release their long awaited and highly anticipated Self-titled, sophomore, full-length album. Guitarist Hunter Moore says, “The guys and I love to play and connect with other people through our music. Giving even one other person hope and the ability to make it through a rough situation is what makes it all worth while to us. Music is the soundtrack to our lives and lifts us up when we need it, take it in!"

Blasting onto the music scene with infectious melodies and arrangements that are staple elements of their undeniable sound. Pardon The Scars' sonic signature is a blend of 90's alternative, groove and progressive metal, spun together with their modern hard rock attack.

Pardon The Scars got its start around 2012 under the name Paracosm. Paracosm had a successful six year run playing venues all over the southeast US in support of many regional and national touring acts. In August 2017, Paracosm released their self-produced debut EP entitled Artifacts, Events, and Parting Shots. Their EP received rave reviews and left listeners only wanting more.

After numerous line up changes throughout the years their music began to evolve and outgrew the Paracosm moniker. Out of the ashes arose a perfectly imperfect four-piece hard rock band known as Pardon The Scars. PTS puts every ounce of themselves into their performances and their stage show is ever-evolving...a testament to their dedication to the art.

Pardon The Scars’ shows welcome everyone to join in on their musical experience. We are who we are, we are all flawed, we are the scarred. Come share your scars with us at a show near you!

We love music. We love people. Just bringin the two together. #AreYouFFI #LoveViolently