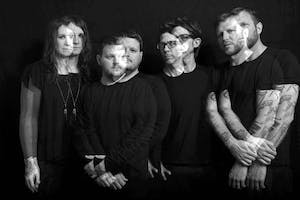 Before becoming a full-fledged punk band, Against Me! was an acoustic solo project spearheaded by Laura Jane Grace, who began playing shows as a 17-year-old in Gainesville, Florida. Starting in 1997, Grace performed as a solo act wherever anyone would have her, drawing much influence from early acoustic protest music. By 2001, she'd beefed up her sound with the help of a full band -- including guitarist James Bowman, drummer Warren Oakes, and bassist Andrew Seward -- but there would always be some anarchism and Billy Bragg in the group's raucous braggadocio. After a few initial 12" and 7" releases, Against Me! issued the fan favorite Reinventing Axl Rose in 2002. The underground hit blended elements of punk, folk, and country into socially conscious and impassioned anthems. Continuing their reputation of always being on the road, the musicians logged countless tour dates around the country in support of their early material.

A slightly more polished album, As the Eternal Cowboy, was released in 2003 on the indie label Fat Wreck, followed by a compilation of that album's demos titled The Original Cowboy. After the release of a DVD (We're Never Going Home) and another 7", the band returned with its most mature effort to date, 2005's Searching for a Former Clarity. A subsequent headlining tour in support of the introspective, politically aggressive album saw Against Me! proudly hitting every U.S. state, and they signed with Sire Records in December 2005. Later they issued a rough version of Searching for a Former Clarity, titled Total Clarity. They were back on the road by spring 2006, this time opening for the Alkaline Trio, and spent the summer months playing the main stage at the Warped Tour. Though Against Me! were officially signed to Sire's roster, they released their last indie album in the form of Americans Abroad!!! Against Me!!! Live in London!!!, a concert album recorded while on tour in London with Murder by Death.

In July 2007, the band's major-label debut -- New Wave, a decidedly more rock-oriented record produced by Butch Vig -- hit shelves. New Wave was the first album by Against Me! with no acoustic tracks; it was also their first on a major label's tab. Reviews were generally favorable, and the band toured heavily in support of its release. By the summer of 2009, drummer Warren Oakes had officially left the group to pursue an alternate career as a restaurateur, eventually opening up a Tex-Mex eatery in Gainesville. Hot Water Music's George Rebelo joined in his place, and the revised lineup re-enlisted Butch Vig to produce the White Crosses album, which appeared in mid-2010. White Crosses debuted at 34 on the Billboard 200 and Against Me! were prepared to launch an international tour when they canceled a planned leg through Australia and New Zealand in September of 2010. Two months later, the band parted ways with Sire, and then prepared for some end-of-the-year shows with Jay Weinberg sitting in for Rebelo on drums, a move that was made permanent early in 2011. That spring, the demos collection Total Clarity appeared on Fat Wreck Chords, and as Against Me! started work on a new album, they launched their own record label called Total Treble Music; that year, Grace also opened an Elkton, Florida-based recording studio bearing the same name.

In a May 2012 interview with Rolling Stone, Laura Jane Grace went public with her gender dysphoria, announcing her plans to transition to living as a woman and abandon her birth name, Tom Gabel. Against Me! began working on a new album called Transgender Dysphoria Blues in 2012 and, a few months after the interview, the band played its first dates since Grace's news. Toward the end of the year, Weinberg left the troupe and, the following May, Against Me! announced bassist Andrew Seward had left the band. Laura Jane Grace continued working with guitarist James Bowman and the band released Transgender Dysphoria Blues to wide acclaim in January 2014.

Transgender Dysphoria Blues was something of a breakthrough, achieving their highest chart placement to date -- it peaked at 23 on Billboard's Top 200 -- and strong reviews. On its supporting tour, Against Me! recorded the material that became their 2015 live album, 23 Live Sex Acts. During that tour, bassist Inge Johansson and drummer Atom Willard became full-time members of Against Me!, and this is the lineup that recorded 2016's Shape Shift with Me. ~ Johnny Loftus

A couple of years on from the release of debut album Messes, Detroit’s Stef Chura arrives fresh from the announcement that this summer will see the release of Midnight, her gritty, vehement new album which was recorded and produced by Will Toledo of Car Seat Headrest. It’s also Stef’s first new collection of songs for the Saddle Creek label.

Full of big, bold, beautiful guitar-pop songs, if its predecessor was a raw, somewhat unadorned document of Stef’s work, then Midnight is the muscular, swaggering evolution. “This album has a depth to it and a particular sound because of Will,” Stef states regarding Toledo’s input, and it’s true to say that his spiky nuances can be found across the length and breadth of Midnight, the record presenting an exhilarating rush of sound and colour as Stef’s spirited vocal and signature guitar sound unravels alongside in a thrilling meeting of ideas and influences.

Equal parts thrilling and angsty, Midnight is a testament to the collaborative process, a record that makes the very most of those who came together to make it, but more than that, it’s a firm statement of Chura’s tenacity and perseverance; the work of an artist never resting on their laurels but leaping onwards and upwards, no matter what.