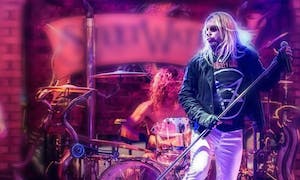 The Ultimate Motley Crue Tribute Band is here! Carnival of Crue is a Florida Based Motley Crue Band with a look-alike Vince Neil that is so close you will swear it’s the real deal. This is not some Beatles Tribute show! Expect Tattoos, Blazing Guitars, Raunchy Rockin' songs and a high energy show with all the hits!!!!

This is not just a band...it's a full on show! They look, sound, and ROCK like the REAL THING!

If Van Halen is the epitome of rock 'n roll on steroids, then Rothchild (tribute to Van Halen & David Lee Roth) is the injection your memory needs to re-live the the greatest, high-energy music ever created! Throw away all your brown M&M's and pull out your Jack, 'cause Rothchild, led by former Blue Angels Crew Chief / Queensryche's American Soldier, AJ Fratto on vocals, features Chris 'Oz' Osborne on shredding guitar, the powerhouse Michael Lukers on the monster kit and low end devastation by Wayne Vannoy on bass. Performing hits like “Running With The Devil” or “Yankee Rose”, Rothchild are here so you can raise your fists to the most kick ass music in history since 1984, until you are screaming for somebody to get you a doctor! With a dazzling display of technical flash, flamboyant attitude and rock 'n roll thrill, Rothchild performs the very best songs that catapulted Van Halen and David Lee Roth Band to MAMMOTH proportions!