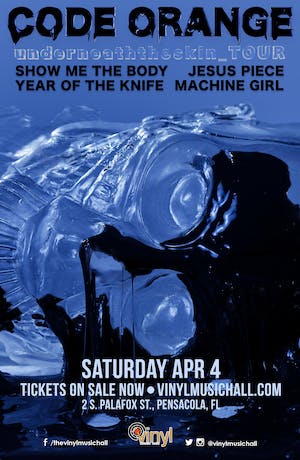 iCal
Google
Evoking the frantic fury of metalcore progenitors like Converge, Code Orange are a metal band based out of Pittsburgh, Pennsylvania.

Evoking the frantic fury of metalcore progenitors like Converge, Code Orange are a metal band based out of Pittsburgh, Pennsylvania. Formed in 2008 as Code Orange Kids while its members were still in high school, the band originally formed as a more traditional punk outfit before exploring the realm of heavier music. By 2012, the lineup of Eric Balderose (guitars/vocals), Reba Meyers (guitars/vocals), Joe Goldman (bass), and Jami Morgan (drums/vocals) announced they were signing on with Deathwish, the label of Converge frontman Jacob Bannon. That same year, Code Orange made their menacing full-length debut with Love Is Love/Return to Dust. A sophomore effort, I Am King, followed in 2014. The band's Kurt Ballou-produced sophomore LP, I Am King, dropped in 2014 and debuted on the Billboard 200 at 96, peaking at number ten on the Top Hard Rock Albums chart. In October of 2016 the band released a new single, "Forever," in anticipation of the release of its much anticipated third studio album, Forever, which arrived early the following year via Roadrunner Records. ~ Gregory Heaney