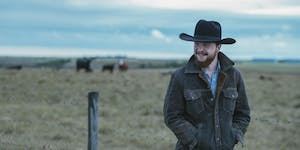 A singer/songwriter whose work is a literate but rough-hewn variation on classic country styles, Colter Wall was born and raised in Swift Current, Saskatchewan, Canada in 1996. Wall first picked up the guitar when he was 12 years old, and by the time he was 13, he'd decided he wanted to make music his career. Initially, he played in local rock bands, but as he dug deeper into rock history, he developed an interest in the gritty, traditional sounds of blues and Appalachian country, and his ambitions moved from playing lead guitar to songwriting. In time, Wall shifted from playing with a rock band to solo gigs focusing on his country-accented material, and he struck up a friendship with the members of the Saskatchewan roots music outfit the Dead South, who took him on the road as their opening act. Producer Jason Plumb and the indie label Young Mary's Record Company were struck by Wall's talent as a performer and songwriter, and took him into the studio to cut an EP. Released in 2015, Imaginary Appalachia earned enthusiastic reviews on both sides of the Canadian/U.S. border, and earned him some influential friends, including Lucinda Williams (who invited Wall to open a show for her at Nashville's Ryman Auditorium), Rick Rubin (who signed him to a publishing deal), and Steve Earle (who said "Colter Wall is bar none the best young singer/songwriter I've seen in 20 years"). Wall's first full-length album, a self-titled effort, was released in March 2017; produced by Dave Cobb, it was recorded in RCA's famed Studio A in Nashville. Released a year later, Wall's second Cobb-produced effort, Songs of the Plains, was a thematic collection of originals and a few choice covers honoring his Western Canadian heritage.