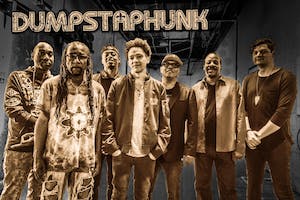 iCal
Google
Dumpstaphunk stands out among New Orleans' best as one of the funkiest bands to ever arise from the Crescent City.

General Admission * Standing Room Only * If Any Seating Is Available, It Will Be On A Strictly First Come-First Serve Basis * Additional $5 Cash Surcharge At The Door For Under 21 * Attendees Under 16 Must Be Accompanied By A Ticketed, Adult Guardian * Posted Times Are Door Times- Events Generally Begin 30-60 Minutes After Doors Open * No Re-Entry

Dumpstaphunk stands out among New Orleans' best as one of the funkiest bands to ever arise from the Crescent City. Born on the Jazz & Heritage Festival stage, and descended from Neville family bloodlines, these soldiers of funk ignite a deep, gritty groove that dares listeners not to move. Their performances combine ingenious musicianship and complex funk and jazz arrangements with soulful melodies that are simple enough for anyone to enjoy. In Big Easy tradition, dueling baselines from Tony Hall and Nick Daniels III set off one of the dirtiest rhythm sections on the planet, while Ivan Neville lights up the Hammond B3 keys and cousin Ian Neville's funky guitar riffs send the groove into overdrive. The band recently welcomed their newest member, Alvin Ford Jr. to the quintet, a New Orleans born and raised powerhouse drummer. Dumpstaphunk tosses around lead vocals and four-part harmonies the way Sly & the Family Stone did, but with three studio albums under their belt, Dumpstaphunk stands on the merit of their own material. Songs like "Dancin' To The Truth" off their latest record, Dirty Word (July 30, 2013, Louisiana Red Hot Records), offer an escape into the funky sublime, sharing the true spirit of New Orleans with every note.

"[A] jackpot of a funk record from Dumpstaphunk." - WNYC

"Funksters and those who relish solid musicianship and incredible vocal harmonies can just be glad that an album like Dirty Word is still being made -- that the 'one nation under a groove' remains vital. It's a head noddin,' booty shakin' disc..." - Louisiana Weekly

"If Dumpstaphunk was a 3 course meal it would start with a juicy rhythm section, then move on to a beautiful arrangement of guitars and keys, seasoned with some soulful vocals and add a pinch of Cosmic Slop for good measure." - Austin Chronicle

"[Dirty Word] stands on its own as the harbinger of a new style of 21st century funk." - The Vinyl District

"Dumpstaphunk has grown from a small side project into one of New Orleans' most prestigious modern funk ensembles." - Rolling Stone

“...Dave Jordan is one of New Orleans’ great songsmiths and bandleaders of my generation.” - Marc Stone Musician and DJ at WWOZ

Before becoming a “solo” artist, he was the bass player/lead singer/founder of the funk band Juice. From the mid/late ‘90’s til late ‘00’s, Juice released 3 albums and were, like contemporaries Galactic, Iris May Tango and All That, part of the resurgence of New Orleans funk music. From 1999-2003, they toured relentlessly, averaging over 180 dates annually. They were recipients of 2000’s Best of the Beat Awards for Best Emerging Funk/Soul/R&B Band and later nominated for Best Roots Rock Band and Album.

He has recorded or performed with a host of New Orleans luminaries, including Art and Cyril Neville, Anders Osborne, George Porter, Joe Krown, Johnny Vidacovich and countless more.

His 2010 solo debut release, These Old Boots, co-produced by Grammy-winning songwriter/producer Anders Osborne, was named a Top 10 record of the year by the Times-Picayune.

"...like a rustic, Cajun Paul Westerberg, mixed with a Springsteenian sense of wordplay." - OffBeat Magazine

His 2013 follow up, Bring Back Red Raspberry was compared to everything from the Rolling Stones' Exile On Main Street to Tom Petty to John Prine. Hittin' The Note magazine called it "a polished, hook-heavy gem."

"..runs the gamut of southern roots sounds, most played with rock's edge and a luxurious lack of urgency." - My Spilt Milk

After the release of BBRR, Jordan returned to nationwide touring, focusing mostly on the Gulf Coast down to Key West and extended tours in Colorado. Described as "Southern roots rock with a Louisiana soul," his band, dubbed the Neighborhood Improvement Association, is a rotating cast of some of the finest, most in-demand roots rock, funk and blues musicians in New Orleans.

In 2017 the band was nominated in OffBeat Magazine’s Best of the Beat Awards for Best Roots Rock Band and Album, for their 2016 release, No Losers Tonight. Produced by Jeff Watkins (James Brown, Joss Stone, New Orleans Suspects), it features 10 originals, honed and crafted from the band’s 4 years of touring.

“Jordan is a dynamic songwriter, crafting tunes that run the gamut from uptempo rave rockers to mid-tempo soul groovers and wistful ballads." - The Vinyl District

"unshakable confidence that is musically refreshing." - Live For Live Music

He has been featured in numerous local, regional and national publications including offBeat, Times-Picayune, Gambit, Hittin' The Note, An Honest Tune; as well as NPR, Raw Travel and every local television station. He is also featured- along with Tab Benoit, Dr. John, Aaron Neville and more- in the Voice of the Wetlands television commercial, promoting the awareness and education of rebuilding the LA Gulf coast. 2018 also marks his 10th consecutive appearance at the Voice of the Wetlands Festival.

Along with his involvement with VOW, Dave is active in various organizations in the New Orleans community, including multiple events with the Team Gleason Foundation and 4 years as a featured guest teacher with Upturn Arts summer art program. Most notably though, is his work with the New Orleans Musicians Clinic. Besides being featured in their print ad campaign, Dave is the producer of Jamie’s BigAss Party, an annual event honoring the legacy and memory of his former bandmate and friend, Jamie Galloway. Now in its 7th year, the block party/crawfish boil, held at the Maple Leaf, has raised over $100,000 for mental health services provided by NOMC.