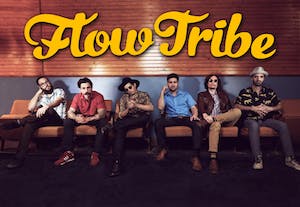 iCal
Google
Flow Tribe captures the passion of New Orleans, bending genres of R&B and funk into their own brand of "backbone-cracking music."

Music lovers across the globe have discovered the secret that music is easily enjoyed with our ears, but completely experienced when our bodies are moving in total accord with the surroundings. New Orleans's own Flow Tribe aims to prove this truth in their own style every time they take the stage. Growing up in the dive bars and neighborhood venues in the city's dimmest corners, this six-piece ensemble captures the passion of the Crescent City, bending genres into their own brand of "backbone-cracking music." Rooted in the tradition of New Orleans R&B and funk, spiced with Cuban flair, and dipped in rock and hip-hop, these musicians invite their audiences to groove their hips until they sweat as they jump from rhythm to rhythm each and every night. In September, Flow Tribe hopes to move you in more ways than one with the release of their 2014 EP, Alligator White.

It's been quite a wild ride for the band up until this point. As lifelong friends, members K.C. O'Rorke (lead vocals, trumpet), John-Michael Early (harmonica, washboard, vocals, keyboard), Russell Olschner (drums), Chad Penot (bass, vocals), Bryan Santos (guitar, timbales), and Mario Palmisano (guitar) began formally playing together in 2004 using Penot's back porch as a rehearsal studio. As four of them departed to college, Penot to the fire academy, and Olschner to serve in Iraq, they vowed to keep in touch, never losing sight of the musical chemistry they had collectively harnessed.

In the aftermath of Hurricane Katrina, Flow Tribe regrouped not only to help their city but also to officially launch their band. They soon crisscrossed the country on multiple tours and played alongside the likes of Galactic, Juvenile, Trombone Shorty, and John Fogerty, among others. Within a few years, the invitation came to perform at the prestigious New Orleans Jazz & Heritage Festival, and to date they've been able to live out that childhood dream on three occasions. Performing on both of the main stages in three consecutive years at Jazz Fest earned the Tribe legions of new fans and caught the attention of national publications as well. USA Today complimented their "outstanding…rollicking performance" in 2013 as a "visual spectacle," and the New Orleans Times-Picayune recognized "the happiness induced by a lineup of crisply arranged originals" at their 2014 showing. Other notable performances from Wakarusa to Voodoo Fest moved Relix Magazine to commend their unique live shows as "bizarrely irresistible."

Now, Flow Tribe is ready to usher in the next chapter of its career with the release of Alligator White, the upcoming EP that bares the band's teeth like never before.

"We wanted to write songs that capture every facet of our personality as a group," explains front man O'Rorke. "We don't try to play one style of music, and Alligator White reflects the diversity of our sound. The foundation is funk, which comes from the second line culture of New Orleans. That's where we call home, and it is our common ground with each other. At the same time, our guitarist Bryan Santos brings in a Latin influence as a 1st generation Cuban-American. To round it out, the other guys are into blues, soul, R&B, and rock. We focus on songwriting the most, though. The songs have to pop. We do whatever it takes to get you moving, so you won't hear many ballads."

They certainly do. The song "Back n Forth" includes swaggering piano melodies and robust guitar tones that lead into sweeping hooks. Meanwhile, Kango Slim of the lauded New Orleans rap outfit Partners-N-Crime delivers a sly verse, expanding the groove in the process.

"We wanted to capture the spirit of New Orleans bounce music, and we dig the dance hip-hop vibe too," says O'Rorke. "We grew up listening to Kango, so it was truly an honor to have him on the track. It is one of our biggest departures, but it captures our new direction."

Then, there's the irresistible "Gimmie a Line," which could ignite any party with its slippery rhythms and silky delivery. "That's the classic bar party song," smiles the front man. "You roll in at five in the morning and try to patch up your differences with your girlfriend. It tells the story of partying down in New Orleans."

Elsewhere on Alligator White, "Gon Gitcha" snaps into an undeniably funky, physical groove, while the Latin-flavored "Ooh Yea" was tailor-made to sing along to in any tropical paradise. Both tunes showcase the band's impressive instrumental chops as well as their musical diversity. Last but not least, the track "Won't Be Long" emanates the same energy befitting the band's trademark "backbone-cracking music," while paying tribute to their roots in blues and Southern rock.

In many ways, the EP's title reveals the band's own ethos. "The White Alligator is native to Louisiana," states O'Rorke. "It's not albino because it's got blue eyes. It stands out, and it's similar to how we see ourselves. It's a crazy pimped-out swamp monster. We're both rare breeds. Either you get it, or you don't. We're out there if you want, and you can't miss us."

Nor would you want to miss them, as Flow Tribe throws the ultimate musical celebration every time they hit the stage. The "professors" of music they grew up watching in the haunts and venues of their hometown would be proud to see how these six natives are continuing the New Orleans musical tradition with their raw passion and flair, meanwhile surprising and delighting audiences across the country night after night.

O'Rorke leaves off, "We wanted to make a great album. I hope people feel the diversity and our commitment to releasing the best music possible. Everyone's invited to the party, so let's do this!"