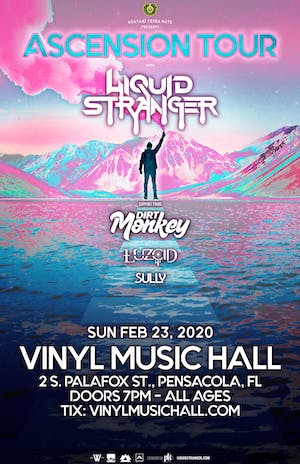 In an ever-evolving universe, the art of maintaining complete and total fluidity is the most necessary key for survival. Renowned for his metamorphic capabilities and expertly crafted sonic adventures, Liquid Stranger has mastered his ability to slip in and out of genres all while honing his own personal style.

Continuously pushing his own limits with each project, Dirt Monkey embodies the identity of a forward-thinking artist in every sense. Cutting-edge sound design is the name of Dirt Monkey’s game, delivering a signature sound that solely belongs to him; it’s a reflection of his creative mind that’s constantly in flux.

Dirt Monkey unleashed his first full-length record in 2012, and he’s since delivered countless singles, collaborations, remixes, and more albums over the past decade. 2018 saw the release of his latest album off the acclaimed SubCarbon Records, Rise of the Octopeel. Beyond his singles and EPs released on labels like Deadbeats, Disciple Round Table, Circus Records, and more, Dirt Monkey proves his mettle as an exceptional remixer, too: he’s recently unleashed official remixes for Doctor P, GRiZ, Boogie T, and more. In Dirt Monkey’s world, the music is what matters most — and it shows.

Before making his way into 2020, Dirt Monkey has a few new tricks up his sleeve to round out the year: he’s announced his headlining Primatology World Tour, where he’ll be bringing some of his best friends and talented collaborators on a tour around the world. In July, Dirt Monkey announced the launch of his own record label, 19K. Representing a culture rather than just a new imprint, 19K is built by talented artists with the common goal of celebrating true artistry. With a forward-thinking ethos, 19K vows to cultivate the next generation of experimental electronic music by showcasing the talents of artists both revered and obscure.

Over the past several years, Dirt Monkey has carved his uplifting, bouncy, and uniquesounds into the Denver dubstep community, and onto the national touring scene. He finished last year with a strong release schedule: “Wubula” (SubCarbon), “Beef” w/ Boogie T (SubCarbon), and “Wobble Like This EP” (Disciple Round Table), He took this brisk pace into to a fall tour with Bear Grillz and direct support on a Ganja White Night tour at the beginning of this year that sold out nearly every date.

He has worked and collaborated with a wide-variety of artists such as: Ganja White Night, DMVU, Illenium, Boogie T, Conrank, Subtronics, Run DMT w Barrington Levy, and Jantsen. Dirt Monkey has performed at a countless number of breathtaking venues, including Red Rocks Amphitheatre, clubs in France, and Beta Nightclub in Denver, CO (where he has held a residency for the last 5 years). Also, for the past four years, he established and ran the record label, Kairos Audio, before handing it off to label partner and co-founder, Jantsen Robertson.

Dirt Monkey is fresh off a sold out after party at Buku Music + Arts Project and a great festival performance at Okeechobee Music and Arts Festival. Now he’s gearing up for a co-headline tour with Subtronics, “Warp Drive 18”, which will carry him into confirmed appearances at EDC Las Vegas, Toxic Summer, and Global Dance Festival, preparing audiences for an Full Length album, an EP, and no less than 5 singles on deck through the rest of the year on top of a FULL US Fall 2018 Tour!

Dirt Monkey has always striven to fuse the wonky, high-energy sounds of old school dubstep, and the crisp sounds of EDM. Now, he’s succeeding in bringing that sound to a global audience.

Luzcid's music is a sonic odyssey. A series of auditory adventures in which the participants completely escape time and space. He meticulously eludes genres in order to welcome a variety of enthusiasts to gather and celebrate the rewards of community. Luzcid hopes music can become platform in which the peoples of the world can reconnect and begin to restore our home to a place in which we all enjoy living.

He has already performed in almost every major US city and continues to spread his wings across the music community.Although his production stands proudly on its own ,Luzcid has proven he is one of those acts you need to experience live to get the full picture. He uses ableton live to weld a sonic quilt of sensationally hefty hip-hoppy psychedelic bass music.

His song with Bassnectar "Science Fiction" is a splendid illustration of Luzcid's ability to collaborate and conceive a fierce beauty with one of EDM's most revered artists.