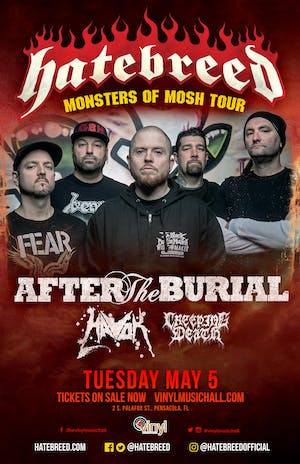 After The Burial, Havok, Creeping Death

iCal
Google
With steadfast determination, drive, and dedication, HATEBREED cement themselves as one of heavy music’s strongest institutions.

General Admission * Standing Room Only- Any Available Seating Will Be On A Strictly First Come-First Serve Basis * All Ages * Attendees Under 16 Must Be Accompanied By A Ticketed, Adult Guardian * Posted Times Are Door Times- Events Generally Begin 30-60 Minutes After Doors Open * No Re-Entry

An institution can be relied on. Its foundations don’t shake due to the winds of change or tides of trends - no matter how volatile, omnipresent, or tenuous.

With steadfast determination, drive, and dedication, HATEBREED cement themselves as one of heavy music’s strongest institutions on their seventh full-length offering and very first for Nuclear Blast worldwide, 2016’s »The Concrete Confessional«. Since 1994, the Connecticut quintet - Jamey Jasta (vocals), Chris Beattie (bass), Wayne Lozinak (guitars), Frank Novinec (guitars), and Matthew Byrne (drums) - has risen to the ranks of hardcore and heavy metal elite with a GRAMMY® Award nomination, main stage slots on festivals, and countless fans worldwide. 2013’s The Divinity Of Purpose earned their highest entry on the Billboard Top 200, bowing at #17 with impressive first-week sales in excess of 17,000. When it came time to return to the studio after two years on the road, Jasta and his cohorts clung to the bedrock on which their legacy stands firm.

“There’s nothing better than loud amps in the face, cranked up riffs that hit you right in the chest and lyrics that spark a new thought and give you a charge,” he declares. “That’s our musical DNA. We could just be who we are. We don’t need to incorporate whatever the trend is. We can just be HATEBREED. There are some new highlights to the game, but you know it’s us.”

The Divinity Of Purpose brought them to new areas of the globe as the headlined festivals in the UK, Finland, Norway, Germany, and Eastern Europe and landed a slot on Ozzfest Japan. They would perform at Poland’s Woodstock in front of 400,000 people. Stateside, the band supported longtime friends BLACK LABEL SOCIETY in the winter of 2015 and then got the opportunity to be direct support to SLIPKNOT on a spring 2015 run in between festival appearances at Rock On The Range, Welcome To Rockville, and more as well as MOTÖRHEAD's Motörboat with SLAYER and MOTÖRHEAD.

“Riding into this album, I realized we could play with bands of every genre nearly anywhere without deviating from who we are,” continues Jasta. “The Motörboat was another real career highlight. We played this exclusive event with some of our chief influences. We got to literally chart new territory.”

Returning home in the fall of 2015, they entered the studio with longtime producer Zeuss (ROB ZOMBIE, SOULFLY). Immediately, they channeled the spirit that’s long defined their signature sound. By January, the record was mixed by Josh Wilbur (MEGADETH, LAMB OF GOD) and primed for ignition.

“We had a really good vibe in the studio,” he says. “The record is a snapshot of this time for us.”

It also reflects what’s going on outside. The opening track and first single 'A.D.' fuses together torrential thrashed-out guitars, double bass drums, and Jasta’s immortal growl before an incendiary lead. The singer dissects what the American Dream means in a climate of upheaval. “Fight fire with fire, you’ll see everyone’s burning,” he screams. Think of it as »Vote With A Bullet« or »Holy Wars…The Punishment Due« for the Instagram age.

“It’s a mirror of both sides of the story whether it’s what you believe in the media or what you actually see,” he explains. “Musically, it came together quickly. It’s about all of the frustrated feelings that come out when I turn on the news. So much of our attention is focused on the wrong areas. People want to one-up each other with better clothes and cars, and it’s all bullshit. Nobody goes to the grave with any of that stuff. It’s not all instant gratification. What exists on the phone and computer isn’t what exists in real life. What is the American Dream anymore?”

The machine gun chug of 'Looking Down The Barrel Of Today' proves equally uplifting and undeniable. “I wanted something to get crowds pumped up,” he admits. “So many fans will tell us, “Your records help me get through my life.” I needed to encourage this cyclical power to get up and face the day. You either make the best of today, or you’re done in by it.”

'Something’s Off' carries an ominously lyrical bass line into a guttural chant, showcasing Jasta’s chilling vocal dynamics in the process. “I’ve written songs about depression, alcoholism, and falling back into destructive patterns,” he says. “However, I never felt like I could really put my finger on what anxiety is. It’s not just social anxiety but this unexplained feeling of unease, like I’m in a fog. I’ve felt it occasionally since I was in grade school. You can’t control when it happens. Heavy music has kept that beast at bay - in addition to exercise and experiences with my family. I had to confront it directly in the lyrics here.”

Elsewhere, 'Remember When' and 'Slaughtered In Their Dreams' juxtapose visceral lyricism with a searing sonic backdrop as chaotic as it is catchy. Through and through, »The Concrete Confessional« is classic HATEBREED.

In order to transfer this message to the masses, the band inked a global deal with Nuclear Blast. “They’re world-renowned mainstays in the metal community,” he smiles. “We get to be in the company of career bands we look up to.”

HATEBREED have come a long way from the East Coast’s storied nineties underground scene. Their journey has seen them achieve a 2005 GRAMMY® Award nod in the category of “Best Metal Performance” for »Live For This«, sell over 1,2 million records, and land a #1 debut on Billboard’s DVD Chart with 2009’s »Live Dominance«. Moreover, they’ve annihilated audiences from Mayhem Fest to Ozzfest Japan and Download Festival to Wacken, Hellfest, and beyond.

Now, The Concrete Confessional fits right into the bold, bloody, and beating heart of the HATEBREED institution.

“The title had to be something that was heavy and hard, but also vulnerable and honest,” Jasta leaves off. “Heavy music is this cleansing, therapeutic, and cathartic experience for so many. You’re there, the guitars are crushing you, and someone’s screaming their head off - sharing their pain and aspects of their life through words, poetry, or songs. There’s nothing like it. You confess you have negative thoughts, and you purge them. For however long you’re at the show, there are no bills to pay, issues to deal with, or problems holding you back. You can be free.”