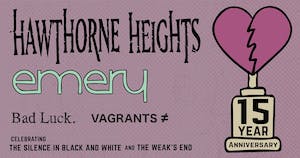 Dayton, OH natives, Hawthorne Heights are back with their first release on Pure Noise Records, BAD FREQUENCIES out now. After 14 years, HAWTHORNE HEIGHTS - JT Woodruff (Vocals, Guitar), Mark McMillon (Guitar, Backing Vocals), Matt Ridenour (Bass, Backing Vocals), Chris Popadak (Drums) are still delivering monumental albums and maintaining their DIY mentality, while remaining dedicated to their longtime fans. Both their releases, The Silence in Black and White, and If Only You Were Lonely, received Gold certifications, as well as their single “Saying Sorry”. Says Woodruff: “It's easy to stay inspired if you keep a level head. To last a decade you have to have strong fan support, strong relationships, and the ability to improvise. We have found that maintaining your core values will take you wherever you want to go in life.”

The forthcoming album, BAD FREQUENCIES was produced by the band and Nick Ingram (Hotel Books, Capital House Studio) , and mixed by Cameron Webb (Grammy Winner, Motorhead, NOFX, Social Distortion, Pennywise). The first single, “Pink Hearts” is about “burning through relationships, because you are selfishly just having fun when you are young,” says Woodruff. “Eventually you have to wake up and grow up, and hope that you haven’t cut someone too deep.”

With the release of BAD FREQUENCES, Hawthorne Heights hope to continue connecting with their unwavering fan base, and share music they’re truly proud of with a wider audience. Says Woodruff: “We’ve always tried to be a shining light for our fans. Some of them look to us as a sign of hope, and we appreciate that. We try to write songs from bad experiences in our lives, in a way that they can relate to their bad experiences. Hawthorne Heights has always taken a "We're All In This Together" approach, and we still stand by that.”

DIY has never been more embodied than by one of the hardest working acts in the industry, Emery. Choosing to go their own way after a fruitful and longstanding relationship with Tooth & Nail Records, vocalist Toby Morrell and guitarist Matt Carter embarked on their own dream, forming BadChristian. BadChristian is a media entity now acting as record label, blog, and podcast. Through their new and blossoming self-made home, Emery released 2015’s You Were Never Alone, receiving massive praise from longtime fans and critics alike. In a very popular move, the four piece recruited former bassist Devin Shelton to rejoin for the release, injecting the record with styles that haven’t been present in any Emery record since Shelton’s departure. YWNA charted number 1 on Billboard's Top Christian Albums and number 69 on Billboard's Top 200 chart. The band’s sixth full-length album went on to sell more units in it’s first week than any of their previous label-released albums. For their first self-released product, Emery utilized their loyal fan base along with a whole new wave of Emery supporters who have sprung up from the popularity of The BadChristian podcast, to crowd fund the record and produce ten music videos for YWNA. In addition to their traditional club tours, Emery has further embraced the DIY ethos by gracing living rooms, coffee shops and parking lots to bring You Were Never Alone to fans across America. This new year promises to bring more surprises from the four piece, including side projects and more fan interactive content.

Bad Luck. was a solo project from Long Island, then they were a band from Florida. While in the Sunshine State, they released Cold Bones in 2014 and Noise in Your Head the following year, two compact yet abrasive pop-punk releases that placed nostalgia and neuroses on the same plane. After those anxieties collapsed a hefty touring schedule and the group's first taste of the industry ecosystem, Bad Luck. seemingly vanished, kept afloat by a whispering community of fans kept alive by their short discography. Having since returned to their home base and their homegrown mentality, Bad Luck. is looking to add to their short but sweet legacy and score a longer winning streak.

Letting go is hard, but if you want to move forward, it’s something you have to do. Floridian post-hardcore quartet Vagrants know this better than most. Last year, the band were rocked when their original vocalist announced that he was to spend time in jail. The news initially dealt a huge blow to their ranks, particularly in the case of guitarist, co-vocalist and chief songwriter Jose DelRio, who’d founded the band with drummer Anna Hayes in 2017. Having made waves via debut single “Window Panes” and with plans in place for a follow-up EP, the discovery that their frontman was to face incarceration threatened to shackle a bright young group just when they looked set to break-out of the local Pensacola scene.

“I’ve known our previous singer for a very long time––he’s one of my best friends,” DelRio begins. “To lose him from our lives completely when he went to jail was hard––it was like having the rug pulled from beneath us. Ultimately, though, it prompted a big change for us all.”

With a good portion of their debut record already written, Vagrants regrouped and pressed ahead with recording. Finding a replacement for their former singer in Dylan Knapp––a man who’d originally been drafted in to play bass before impressing the rest of the band with his vocal ability––Vagrants set about channelling their turmoil into a post-hardcore sound with roots in the genre’s star-studded past, but with one eye firmly on its future. Said record, the four-piece’s debut EP Separation, is a brilliant first move born out of loss.

From the self-reflective poeticism of “St. Anthony” through to thoughts on losing those once close (“Circle Of Friends”) and lamentations on a broken relationship (lead-single “Clarity”), Vagrants tackle all facets of the concept behind which their record is named. It all comes to a head on Separation’s title-track: the only song wholly written after Knapp’s recruitment, its lyrics attempt to make sense of the EP’s tumultuous inception, and whilst at times things get pretty dark, a powerful “carry on” message shines through.

“It’s mainly about how we felt when our old singer broke the news,” DelRio remembers. “We were trying to cope with losing one of our best friends, whilst also needing to figure out where we went from there and coping with the uncertainty of what was to come next. In the end, we realized we had no choice but to move forward, despite an important part of our lives coming to an end.”

Each of Separations’ five tracks is about losing someone or something close to you. An EP whose primary aim, according to DelRio, is to provide solace, comfort and catharsis to the listener, it’s a body of work which spans many facets of alternative music but one that retains its identity and heart throughout. A sound that combines They’re Only Chasing Safety-era Underoath with the raw intensity of Taking Back Sunday and the forward-thinking nature of Circa Survive and Being As An Ocean, Vagrants’ music is taking post-hardcore to territory previously unexplored.

Separation is the sound of a band refusing to give in and emerging victorious, and whilst its creators have had to let go of the past, in doing so, they’ve opened the door to a future bursting with promise.