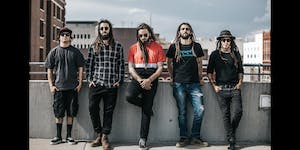 For Peace Band, The Ries Brothers

General Admission * Standing Room Only- Any Available Seating Will Be On A Strictly First Come-First Serve Basis * All Ages * Additional $5 Cash Surcharge At The Door For Under 21 * Attendees Under 16 Must Be Accompanied By A Ticketed, Adult Guardian * Posted Times Are Door Times- Events Generally Begin 30-60 Minutes After Doors Open * No Re-Entry

As the genre of Reggae music is continuously evolving, Los Angeles, California, based Iya Terra has found a way to take the messages of traditional Roots-Reggae and seamlessly mash them up in a today version. The young group of musicians have chosen the name Iya Terra, meaning “Higher Ground,” as the launching pad to create positive, conscious music while spreading messages of anti-establishment, simple living, and a healthy lifestyle. Their modern approach to the music, high-energy performances and full sound add a new dimension to traditional Reggae that appeals to an audience of all ages, opening the doors for them to be labeled as one of today’s leaders in the “New Roots” movement.

Lead guitarist and vocalist, Nathan Feinstein, along with lifelong friend and bassist, Nick Loporchio, began their musical journey to spread a conscious message to the masses while singing songs on the sidewalks of UCLA in the summer of 2013. Since then, the band has gone on to add longtime friends, Luis Tovar on keys and Danny Monar on percussion in the spring of 2014, while also acquiring drummer, Blake Bartz, in the fall. Most recently, the band completed their current lineup with Nick Sefakis joining on rhythm guitar in March of 2015.

The band’s first recorded release consisted of a 6 song self-titled EP that dropped in the spring of 2014. After receiving a great response and several requests to put out more music, Iya Terra released their first full-length album, “Full Circle,” on April 14th, 2015. Produced and engineered by the award winning, JP Hesser, the 10-song album debuted at #4 on the iTunes Reggae Charts and #12 on the Billboard Reggae Charts. Recorded at Castaway 7 Studios in Ventura, California, “Full Circle” is host to several special guest appearances by some of the hottest rising stars in the modern Reggae scene.

Iya Terra set sail on their first tour in August 2014 with good friends, Ital Vibes. The “Link Up Tour 2014,” presented by Ozzie of We Should Smoke and constructed solely by Nick and Nathan with no additional management, proved to be a huge success in the next step of the band’s musical voyage. Following the tour, the band sought out guidance under Rude Entertainment Productions and since then, has shown no signs of slowing down. Since acquiring the new management in November of 2014, Iya Terra has been relentlessly playing shows all throughout the Southwest region of the United States while also reaching new areas thanks to generous invites to play several music festivals and joining on multiple tours running along the west coast such as the Kingston City Tour with New Kingston (Brooklyn, NY) and True Press (Monrovia, CA), The Youth Rising Tour with Synrgy (San Diego, CA) and Ital Vibes (Carson, CA), and most recently, a run with Tribal Seeds’ own, Gonzo with Beyond I Sight (Redondo Beach, CA) and White Glove Service (Fresno, CA).

Even with their impressive resume, Iya Terra, continues to move forward. The band is currently working on new music with plans to record a new EP in December of 2015. Currently scheduled to make their debut at the 31st annual Reggae On The River, Iya Terra is set to follow up with a few shows playing alongside the recently reunited, Tomorrows Bad Seeds, and a September run with Hawaii’s own Inna Vision. What has now become a result of the manifestation of their dreams, the band holds the intent to spread their music through extensive touring so stay tuned for Iya Terra bringing the vibes to a city near you!

Coming from an island 36 miles long, 14 miles wide and 5,000 miles away from your governing mainland instantly makes you different. For Peace Band embraces their island roots as they activate the masses through conscious reggae music. The only artist from Guam currently active in North America and abroad, they have honed their sight on fans from across the globe, delivering authentic island reggae with the spirit of “inafa’maolek,” meaning everyone is welcome.

Formed in 2012, Freddy Bordallo (Drums/Vocals), Jacob Iosa (Keys/Vocals), Danton Cruz (Bass/Vocals) and Ronald "RJ" Pereira (Guitar/Vocals), quickly gained prominence at home, winning the 2014 Island Music Awards for Best Original Song, and 2015 Island Music Awards for Best Reggae Band. July 27, 2018 marks the release date for their sophomore album Always Love, released on the Rootfire Cooperative. This latest offering presents the listener with top-shelf reggae music amplified by high-quality production and enough island vibes to leave you searching for land in your own living room. Tapping influences from The Police to The Doobie Brothers to Earth Wind and Fire, For Peace Band has embraced the importance of quality songwriting since their early days. Undeniably infectious melodies are met by a band recognizably comfortable in their role as the new guardians of island roots music.

Always Love consists of 13 tracks revolving around themes of self-awareness, honest love, and homage to the culture the band has grown up in. The title track opens the album with a clear message “Don’t let no one tell you what you’ve got to be. Just be yourself, do what is right for all to see…” The first single from the album, “Rarest Flower,” speaks to a muse “I never ever thought that I would meet a beautiful woman so extraordinary,” and subsequent tracks feature guest vocalists Star (The Steppas) on “Revival,” remembering the legends who came before them, including tributes to Gregory Isaacs, King Yellowman, Burning Spear and more. The final guest vocalist, friend and contemporary Nathan Feinstein (Iya Terra) sings on “Judgment Day,” featuring a heavy, driving rhythm over a powerful declaration that one’s actions will speak louder than their words when Judgment Day comes.

For Peace Band is on tour now. In their own words: “For Peace is a process, a movement, a way of life. We live it everyday. And we strive to keep the practices and customs we learned growing up alive in every aspect of our band.”

In the winter of 2018 they completed a 27-city tour in support of G Love & Special Sauce and finished a second run with G. Love beginning in mid-July, from North Carolina to Maine. In late August they began a two month-long, 18-state, 36 city tour which started on the west coast and ended on the east coast in mid-October. In spring 2018 the boys appeared at the Gasparilla Music Festival in Tampa, Fl., SunFest in West Palm Beach, Fl., and the California Roots Music & Arts Festival in Monterey, Ca. In March of 2019 they opened for 311 at the House of Blues Orlando, FL, and soon after were invited aboard the 311 Caribbean Cruise to play 3 sets alongside 311, Tribal Seeds, Passafire, The Skints and more. They have twice toured nationally as the opening act for the iconic band CHICAGO and did a 15 city tour opening for the late Butch Trucks (Allman Brothers) & The Freight Train Band. Last year the brothers headlined their second show at “The House that Les Paul Built,” the legendary Iridium ion Broadway n NYC, with special guests Byron Isaacs of The Lumineers and Vini “Mad Dog” Lopez, founding member of the E Street Band and member of the Rock & Roll Hall of Fame. The Ries Brothers have also opened for David Cook, Daughtry, Los Lonely Boys, REO Speedwagon, Little River Band, The Edgar Winter Band & The Family Stone among others. They have sold out three headlining shows at Ruth Eckerd Hall’s Murray Theatre in Clearwater, Florida. In the summer of 2013, the boys participated in the exclusive Los Angeles Grammy Museum’s Music Revolution Project at Ruth Eckerd Hall. In the summer of 2014 the boys were part of the Van’s Warped Tour in Florida. The Ries Brothers were named by The Tampa Bay Times as one of their favorite artists of 2015 and by Creative Loafing as a 2016 Breakout Artist. They have released 3 EP’s and a Live Concert DVD. Their first full album "The View From The Outside”, produced by Ted Bowne of Passafire, was released on November 10.