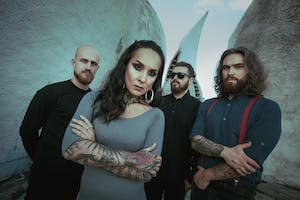 In less than 10 years, the four-piece Progressive Groove metal wrecking machine known as JINJER have carved their very own place in the Heavy Metal landscape and are poised to go even further in 2019 and beyond. Hailing from Donetsk, this Ukrainian musical oddity formed in 2009 but consider the official start of the band with the addition of the incredible vocalist and Femme Fatale Tatiana Shmailyuk in 2010. The band labored intensively and honed their sound in practice rooms and local stages relentlessly, culminating in their now cult first album release INHALE, DON'T BREATHE in 2012. The following year JINJER were nominated and won Best Ukrainian Metal Band. They would be awarded this prize again a few years later.

While most bands from a country not exactly known for it's Heavy Metal exports would be content to enjoy the little recognition received in those first few years, it was clear that JINJER craved more and were willing to go the extra mile to make this happen. It was this attitude and clear vision that pushed the band to quickly write and release their second album CLOUD FACTORY (2014), and venture into the international touring market for the first time, booking their own shows and building their reputation face to face, fan to fan and more importantly under their own terms.

It was this intensity that caught the attention of Napalm Records, who quickly signed JINJER leading to the release of their critically acclaimed third album KING OF EVERYTHING (2016), as well as the game changing single and video for PISCES, which gained the band new fans, millions of views/streams and countless reaction videos on YouTube. KING OF EVERYTHING showcased the musical prowess and growth of the entire band while opening the floodgates to a bigger International touring circuit which JINJER gladly took advantage of. By the end of nearly two years of non-stop touring in Europe, JINJER added new territories such as Israel, Philippines, United Arab Emirates, United Kingdom, America, Canada and most of Latin America, while sharing the festival stages and touring with the likes of Arch Enemy, Cradle Of Filth and DevilDriver to mention a few.

Somewhere between touring vans, roadside pit stops, backstage rooms, sound checks, hotel rooms, visa applications, and flights to new tour destinations, JINJER buried themselves in the rehearsal room once again to compose 5 brand new tracks for what would become the MICRO EP, written not only for the fans but for themselves, as they needed something new to keep their sanity on the road.

Released on January 11th 2019 and coinciding with their European Tour start together with Soilwork and Amorphis, the MICRO EP was received with open arms from fans and critics alike and spawned instant favorites APE and PERENNIAL, climbed to the top of many industry charts and radio station lists worldwide and once again showcased the musical depth and songwriting talent of the band, as well as Tatiana's amazing vocal range.

Riverside, California's Suicide Silence formed in 2002. A quintet, the band specialized in that 21st century metal phenomenon known as deathcore and was signed to international mega-metal label Century Media. The band managed to get things rolling quickly, save for a few lineup changes, and went from formation to deal in a mere two years. In the meantime, Suicide Silence issued one pre-deal EP -- the simply titled Suicide Silence -- which saw the light of day on indie labels At the Deep End and SOS Records.

The band's Century Media debut album, The Cleansing, was released in September of 2007, and was produced by John Travis. The album was a bit of a mover and shaker in the genre, breaking through to the Top 100 on the Billboard charts, and became one of the label's biggest-ever sellers. Following the release of the album, the band toured steadily in the U.S. and Europe with Parkway Drive and Bury Your Dead. Members Mitch Lucker (vocals), Chris Garza (guitar), Mark Heylmun (guitar), Mike Bodkins (bass, but later replaced by Dan Kenny), and Alex Lopez (drums) had more reason to celebrate in 2008, as the band was added to the Mayhem Metal Festival, which hit stages that summer.

No Time to Bleed, released in 2009, found the band in the Top 40 of the album charts for the first time, accompanied by positive reviews. Third album The Black Crown switched from anti-religious topics to personal themes from lyricist Mitch Lucker, and it became the highest-charting album of their career. Lucker, however, died in November 2012 from injuries sustained in a motorcycle accident. A memorial tribute show later that year featured Suicide Silence backed by different vocalists for each song, and by the fall of 2013, the band had found their new lead vocalist, Hernan "Eddie" Hermida from All Shall Perish. The Lucker memorial show was released early in 2014 as Ending Is the Beginning: The Mitch Lucker Memorial Show 12.21.12. 2017 saw the release of the band's eponymous fifth studio long-player, which featured a shift in tone from their deathcore roots into a more melodic, nu-metal-driven direction. ~ Chris True

When nothing is off limits, you can reach your full potential. Toothgrinder realized this fact while making their 2017 full-length, Phantom Amour [Spinefarm Records]. While retaining the slippery schizophrenic spirit that turned them into a critical favorite on 2016's 'Nocturnal Masquerade', the New Jersey quintet - Justin Matthews [vocals], Jason Goss [guitar], Matt Arensdorf [bass], Wills Weller [drums], & Johnuel Hasney [guitar] dramatically augmented their unpredictable creative palette through expanding the grasp on melody, incorporating cinematic electronic flourishes, and even going acoustic, to name a few evolutions. As hypnotic as they are heavy, these thirteen tracks signify "progress" through and through.

"Everybody calls us 'a progressive metal band,' but I think the most progressive thing you can do is surprise your audience and keep yourself happy," says Wills. "I feel like that's exactly what we're doing here. From jazz and classic rock to metal and experimental, everybody brings different flavors to the table. Then, we pour them into the same pot. That's Toothgrinder in a nutshell."

It's also why the band quietly made a palpable impact with Nocturnal Masquerade. As Revolver dubbed them "A Band to Watch," it earned acclaim from AXS, Metalsucks, New Noise, Metal Hammer, The Aquarian and more as the single "Diamonds for Gold" [feat. Spencer Sotelo of Periphery] generated over 300K YouTube/VEVO views and "Blue" cracked 384K Spotify streams.