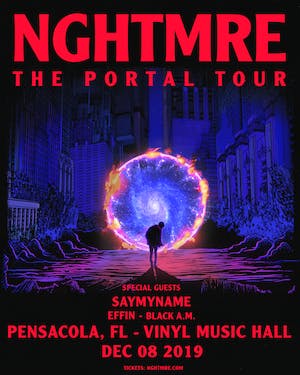 iCal
Google
NGHTMRE is an American DJ and electronic music producer based in Los Angeles, California.

NGHTMRE is a producer who went from anonymous uploads to collaborations with Dillon Francis within just a couple years, L.A.-based artist NGHTMRE gained wider attention with his 2015 single "Street." Along with tours and festival appearances, he has remained a dance favorite, issuing releases like his 2016 EP NGHTMRE.

Born in 1990 in Stamford, Connecticut, Tyler Marenyi (aka NGHTMRE) was raised in Raleigh, North Carolina. After getting a degree in finance from Elon University, he decided to move to L.A. to take a chance on his love of making music. At first, he uploaded trap and house remixes of tracks by Tiësto, Rae Sremmurd, and Skrillex, then he began releasing a set of his own tracks, some in collaboration with producer Slander. He hit in early 2015 with "Street," a track Skrillex played during his headlining set at the Ultra Music Festival. Mad Decent signed the producer that same year and gave "Street" an official release. He made his festival debut with a DJ set at EDC Las Vegas 2015, then 2016 saw Mad Decent release the NGHTMRE EP along with "Need You," his collaborative single with Dillon Francis. A second EP, Magic Hour, arrived in 2018. That same year, he also collaborated on the Chainsmokers' track "Save Yourself." In 2019, he issued the single "Bang" with Shaq and Lil Jon. ~ David Jeffries

SAYMYNAME hails from the greater Los Angeles area. He was raised in a musical family influenced by many genres of music including hiphop, as his father DJ'd for a hobby. Dayvid went on to graduate from Chapman University with a degree in PR and Advertising, where he truly discovered his love for EDM Music

SAYMYNAME boasts the ever so coveted Insomniac Event's DISCOVERY PROJECT 2013. While chasing his dreams he began working over 35 hours a week at Guitar Center after his graduation from college. Any spare time he found, was dedicated into the studio. As a result of years of hardwork, he was signed by Paradigm Talent Agency... the premiere booking agency in the industry.

After tinkering with trap and hardstyle, his re-birth came about as he discovered #HARDTRAP. SAYMYNAME has been on the forefront as a pioneer of this sound movement. Numerous blogs and fans have labeled him as the God Father of HARDTRAP. He boasts support from giant names such as The Chainsmokers, DJ SNAKE, Martin Garrix, Tiesto,, and Carnage who play several tracks in their sets. An endless list of infamous names that show track support, ie: Skrillex, Flosstradamus, GTA, Party Favor, Nghtmre, Slander, 12th Planet, and David Guetta.

2019 will be a pinnacle year which will separate him from the rest of the pack while the music and touring which will continue to catapult him to the next level. It will be a massive year headlining many festival all over the globe, as well as a couple of residencies that are at some of the most coveted night clubs in the world. Keep an eye out for this young exciting act which hovers over the deck at 6'5" over the decks. He brings a mesmerizing stage presence and ridiculous energy that has created a whole new movement and enthusiasm that successfully converts brand new fans at every show and keeps fan coming back for more!​