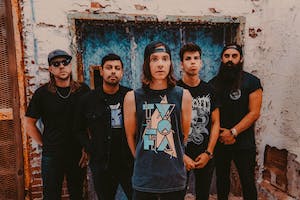 This event is all ages

General Admission * Standing Room Only- If Any Seating Is Available, It Will Be On A Strictly First Come-First Serve Basis * Additional $5 Cash Surcharge At The Door For Under 21 * Attendees Under 16 Must Be Accompanied By A Ticketed, Adult Guardian * Posted Times Are Door Times- Events Generally Begin 30-60 Minutes After Doors Open

Middleburg, Florida quintet The Red Jumpsuit Apparatus are made up of Ronnie Winter (lead vocals, guitar), Duke Kitchens (guitar, vocals), Elias Reidy (guitar, vocals), Joey Westwood (bass, vocals) and Jon Wilkes (drums, vocals). The band's music is an amalgam of pop-punk, pop, screamo and metal styles. Formed in 2003, Winter and Kitchens are the only members remaining from the band's original roster. Within a few months of forming the group, they began gigging and developing a loyal following. The band was well received locally, yet after numerous showcases for record labels, they remained unsigned. Some members were discouraged by the long process and either left or were removed from the band. Determined not to give up, Winter posted an online ad and met Reidy, whose playing style complemented his own. Winter then added drummer Jon Wilkes while Reidy enlisted his childhood friend and former bandmate Joey Westwood to play bass. Just a few months later, following a flurry of industry attention, the band signed with Virgin Records.With their line-up in place, The Red Jumpsuit Apparatus entered the studio last year with producer David Bendeth (Hawthorne Heights, Breaking Benjamin) to begin work on their self-titled debut, which will be released in 2006. The album includes songs such as "Face Down," a scathing indictment of domestic abuse; "17 Ain't So Sweet" a song dedicated to a talented female friend struggling to make it in the music business; and "In Fate's Hands", the namesake of Reidy and Westwood's former metal band.

“If you're a fan of early 2000's pop-punk and post hardcore then we are right up your alley! We formed in early 2016 and dropped our first EP ‘A Sunny Place For Shady People’. In the beginning of 2017 we released a new single and music video but by the summer we had gone on hiatus. After two years we have decided to make music together again!

Pop Punk, Rock and roll, and blues. these were the ingredients chosen to create the perfect little band. but the boys accidentally added an extra ingredient to the concoction. Chemical X. They dont fight crime or anything, they're just a pretty rad band.