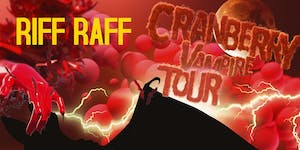 Weird and wild enough to be associated with Soulja Boy, Andy Milonakis, O.G. Ron C., and Diplo's Mad Decent crew, Houston rapper Riff Raff first came on the scene in 2009 as a contestant on MTV's From G's to Gents, a competitive reality series where hardcore ballers tried to become sophisticates. According to OutKast associate and the show's host Fonzworth Bentley, Riff Raff was "beyond" his help, but "crazy like a fox" was another way to think of it, as the rapper had the MTV logo tattooed on his neck, thus allowing him to use the network's name legally on his MTV Riff Raff mixtapes, his posts to video-sharing sites, and all his free tracks uploaded to social media. Thanks to Riff Raff mentioning his phone number in his songs, he was contacted by like-minded rapper Dirt Nasty, along with Andy Milonakis, for some collaborative tracks that landed beginning in 2010, and by 2011 he was signed to Soulja Boy's label and production house, S.O.D. Money Gang Inc. The relationship didn't last long, as Riff Raff signed with Diplo's Mad Decent label in 2012 and issued his Birth of an Icon mixtape. The tape featured early hits like "Jose Canseco" and "Jody Highroller," along with the Action Bronson team-up "Bird on a Wire." He also teamed up with Milonakis and Nasty in 2012 for the project and album Three Loco, while 2013 saw him partner with DollaBillGates for the album Jumpin Out the Gym. In 2014, he went back to his solo career with the Mad Decent release Neon Icon. The album featured the singles "How to Be the Man" and "Tip Toe Wing in My Jawwdinz," and in 2015 it was remixed by DJ O.G. Ron C. for the release Purple Icon: Chopped Not Slopped. Released by the MC's own label, Neon Nation, Peach Panther followed in 2016. The album featured the single "Carlos Slim," the Gucci Mane and Danny Brown collaboration "I Drive By," and plenty of beats from the Atlanta production crew 808 Mafia. Later that year, he and DJ Afterthought released the highly collaborative Balloween, which featured guest spots from Skepta, Quavo, DJ Paul, and many others. Maintaining his prolific run, Riff Raff followed up in early 2017 with the Aquaberry Aquarius mixtape and the full-length LP, The White West. A collaborative album with DJ Afterthought, Cool Blue Jewels, kicked off 2018, with Alcoholic Alligator following just a few months later. ~ David Jeffries