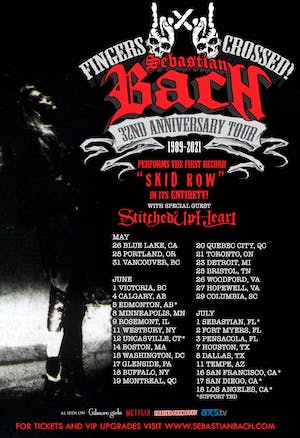 The one-time frontman for hair metal hitmakers Skid Row, singer Sebastian Bach was born Sebastian Bierk in the Bahamas on April 3, 1968. A veteran of short-lived, little-known bands including Herrenvolk, Madame X, V05, and Kid Wikkid, he was living in Canada when in 1987 he received a demo tape from an unknown New Jersey band in search of a lead singer; the group was Skid Row, formed a year earlier by ex-Bon Jovi guitarist Dave "The Snake" Sabo. Signing to Atlantic, Skid Row issued its self-titled debut album in 1989; an opening slot on Bon Jovi's U.S. tour, combined with heavy MTV airplay of the video "Youth Gone Wild," launched the band to stardom, and the singles "18 and Life" and "I Remember You" both reached the Top Ten. Bach, with his wildman persona and photogenic looks, quickly emerged as the focus of fan and media attention, a situation compounded in late 1989 when, during a concert in Springfield, Massachusetts, he was hit in the head by a bottle thrown on-stage; the singer proceeded to hurl the bottle back into the crowd, where it hit the face of an innocent girl, before physically assaulting another audience member as well. Sentenced to three years' probation, Bach then appeared on MTV wearing an offensive T-shirt emblazoned with the slogan "AIDS Kills Fags Dead," prompting outcries from the gay community.

Despite the bad publicity, Skid Row's second album, 1991's Slave to the Grind, debuted at number one, although it quickly fell off the charts; in the wake of 1995's disappointing Subhuman Race, Bach was dismissed from the group, briefly forming a band with ex-Breeder Kelley Deal before going solo in 1997. The album Bring 'Em Bach Alive arrived two years later, followed by a live DVD (Forever Wild) in 2004 and Angel Down in 2007. Bach also turned his hand to musical theater; he appeared in Broadway productions of Jekyll & Hyde, The Rocky Horror Show, and Jesus Christ Superstar. After the release of his 2009 EP, Finding My Way, Bach kept busy touring, and went out on the road opening for Guns N' Roses on their Chinese Democracy tour after repairing his friendship with Axl Rose. He also showed his goofy side by voicing Prince Triton in SpongeBob SquarePants. Bach suffered misfortune when his New Jersey home was rendered uninhabitable by Hurricane Irene in August 2011. Nevertheless, the release of his fourth solo album, Kicking & Screaming, went ahead as planned a month later. During the subsequent tour, Bach fired his longtime guitarist Nick Sterling over contractual differences; he was briefly replaced by Jeff George, then Devin Bronson. In 2013, after the release of the live disc Abachalypse Now, Bach, then living in L.A., went back into the studio with producer Bob Marlette to record his fifth album. The resultant effort, Give 'Em Hell, featured Marilyn Manson guitarist John 5 and Guns N' Roses bassist Duff McKagan in Bach's band, and also had a cameo from guitarist Steve Stevens. The album appeared in the spring of 2014. ~ Jason Ankeny