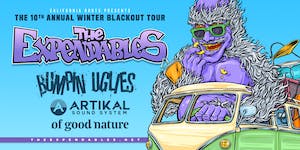 The Expendables enjoyed a laid-back lifestyle growing up in Santa Cruz, CA; surfing, skating, partying, and playing music were commonplace. Since 1997, The Expendables have staked their claim in the California surf/rock genre by headlining venues from coast to coast. Blending Reggae, Punk Rock, and 80s style dueling guitar solos, The Expendables have made heads turn and floors shake for years.

The band consists of four longtime friends: Geoff Weers (Guitar and Vocals), Adam Patterson (Drums and Vocals), Raul Bianchi (Lead Guitar) and Ryan DeMars (Bass). The first seven years of their career was fueled with three full-length, completely independent releases. No Time To Worry (2000), Open Container (2001), and Gettin’ Filthy (2004), would bring in a combined total of over 40,000 units sold with no physical distribution and no record label.

While touring and supporting their album, Gettin’ Filthy, The Expendables would share the stage with Slightly Stoopid and catch the attention of founders and front men Kyle McDonald and Miles Doughty. In 2007 Slightly Stoopid formed their own independent label, Stoopid Records, and signed The Expendables for the label’s first non-Stoopid release, which was The Expendables self-titled. Released in September 2007, the album would be accepted as an instant classic by fans and received rave reviews from critics.

The band continued supporting the album with hundreds of shows over the next two years, gaining fans around the world, and respect from the bands that influenced them. Early 2009 The Expendables toured relentlessly. Within a few short months, they hit the road with NOFX, Less Than Jake, Pennywise, and Pepper. In case that was not enough, The Expendables were honored to join 311 on their Summer Unity amphitheater tour, rocking huge stages, and opening new doors for the band.

The boys decided idle time was not an option after the conclusion of their tour with 311, so they went straight in to the studio to begin recording their next album, Prove It. Paul Leary (producer of Sublime, Slightly Stoopid, Pepper, Supersuckers, as well as guitar player for Butthole Surfers) and El Hefe (guitar player of NoFX) would split producing duties at Big Fish studios in Encinitas, California.

Prove It was released May 11th 2010 debuting at #158 on the Billboard Top 200, #30 on Billboard’s Independent charts, and #4 on Billboard’s Heatseekers! The album also pushed to #15 on iTunes Top 200 and #5 on iTunes Alternative Charts, jumping The Expendables to a new level in their career. The band’s new release would include guest performances by C-Money, OG, and Dela of Slightly Stoopid throughout the album. Jumping into the mix as well would be long time friend G. Love on the ballad “Wells”.

To support the release of Prove It, The Expendables continued their tenacious touring schedule with their popular yearly Winter Blackout Tour, a headlining Spring Tour, a slot supporting Slightly Stoopid and Steel Pulse on this summers, Cauzin’ Vapors tour and will be in Europe with The Mad Caddies during the fall. The band will close out the year with a national headlining run that will be sure to keep The Expendables strong hype building.

Thirteen years later, five albums down and countless miles covered The Expendables show no signs of slowing down.

For nearly a decade now, Bumpin Uglies have been playing their brand of groove-heavy jams – a curiously fun mix of ska, Reggae and good ole’ punk rock – all while putting strong lyrics at the forefront of the music. It’s a formula that quickly took them from local favorites, playing around Annapolis, to a national stage. With a wildly infectious sound, tattoo-worthy lyrics and an itch to take their music to the masses, the band piled into the van years ago and have rarely seen home since.

The Bumpin Uglies’ origin story begins with singer/guitarist Brandon Hardesty playing open mics around Maryland. He met bassist Dave Wolf not too long after and Bumpin Uglies was born. With a proper set of wheels and TJ Haslett on drums, they went off to spread their music across the country like modern day Johnny Appleseeds. The group recently added Chad Wright on keyboards, expanding on their sound.

Raised on everything from Bad Religion and The Beach Boys to Sublime and Reel Big Fish, Bumpin Uglies have managed to take inspiration from some of the best out there, run it through their own distinctive filter and end up with a truly original take on the various genres creating an original hybrid. With a unique sound that’s nearly impossible to ignore, the band has gotten everyone from dreadlocked kids to PBR-fueled tattooed punks moving their heads to their music at festivals and on headlining tours across the country.

When they aren’t on the road, they’ve been camped in the studio, churning out three full lengths, two EPs and a live record. Their latest, 2016’s Keep It Together came out on Right Coast Records and is proof that the band has found their groove. The album consists of a dozen stand-out tracks, any one of which could be considered instant classics for the band. They’re already at work on the follow up, but true to their rep as being on the never-ending tour, chances are they’ll be coming to a venue near you soon.

Based out of South Florida the multicultural group unites American, Jamaican & Hispanic Reggae culture. Performing nationally and internationally collaborations with some of the most influential musicians and artist in the Reggae scene include: Redlyte, The Abbysinians, Apple Gabriel of Israel Vibration, and a descendant of Bob Marley himself Biggz General. The band has had the honor of sharing the stage with Pepper, Dirty Heads, The Wailers, Steel Pulse, Yellowman, Less Than Jake, The Aggrolites, and Jesse Royal.

Their three most recent albums have reached the #2 position on the Billboard Reggae Charts. For their latest EP "Smoke & Mirrors" the group joined forces with singer/deejay Monsoon from Northern Clarendon Jamaica. The veteran singer-songwriter's vocal ability has been compared to Reggae veterans Capleton, Luciano, and Tony Rebel.

Based in Charlotte NC, Of Good Nature, has received quick attention to their newly released, chart topping music. Rock, Groove, Alternative and Reggae are more popular descriptions of OGN’s fusion-friendly approach to today’s music, but this group of prolific songwriters explore a range of styles that have lead to a highly accessible sound. Recent full length album “Timeless” debuted at #1 on iTunes and #3 on Billboard (Reggae Albums Chart) in March 2019 and single “Take Me Anywhere” premiered on Sirius XM’s The Pulse.

Recently back from their national tour, which included Dry Diggings Festival with Rebelution and Slightly Stoopid in Placerville CA, Of Good Nature announce they join Matisyahu as direct support for his tour through the SouthEast in October 2019. Coming February 2020, Of Good Nature is set for third appearance aboard Train’s Sail Across The Sun Cruise. The band has also supported headliners Stick Figure, Sublime with Rome, Dirty Heads, The Wailers, George Clinton, Michael Franti & Spearhead, Arrested Development, Robert Randolph & The Family Band, Blues Traveler, and many more.