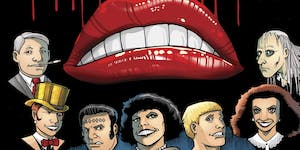 We encourage full audience participation. However, due to safety issues, we cannot allow:

RICE (please use white confetti instead)

We will also sell AUDIENCE PARTICIPATION STARTER KITS through the merch booth at a low price!

Visit the official fan site through the link above for a complete history of the show, videos, tutorials for audience participation and more!

The Rocky Horror Picture Show is a 1975 musical comedy film that parodies science fiction and horror films. With a screenplay written by Richard O'Brien and Jim Sharman, the film features Tim Curry, Susan Sarandon and Barry Bostwick. The film is based on the British musical stage production The Rocky Horror Show.

The film is considered a cult classic and a midnight movie, although it is widely known by mainstream audiences and has a large international following. RHPS was the first movie from a major film studio—20th Century Fox—in the midnight-movie market. The movie is one of the most well known and financially successful midnight movies. It is the longest running theatrical release in film history. More than 30 years later it is still in limited release in cinemas around the world. In 2005, the film was selected for preservation in the United States National Film Registry by the Library of Congress as being "culturally, historically, or aesthetically significant".

The show has gained new national interest due to a highly popular and highly publicized ROCKY HORROR themed episode of the hit television show "GLEE" (with an accompanying soundtrack album even being released) but despite the renewed mainstream recognition, Rocky Horror Picture Show screenings are still THE place for freaks, geeks, weirdos, outcasts and anyone who's ever felt that they were just a little... different... to let their hair down and not dream it, but BE IT!

Let's do the TIME WARP again!