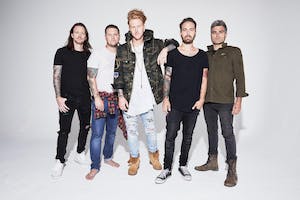 General Admission * Standing Room Only * If Any Seating Is Available, It Will Be On A Strictly First Come- First Serve Basis * All Ages * Additional $5 Cash Surcharge At The Door For Under 21 * Attendees Under 16 Must Be Accompanied By A Ticketed, Adult Guardian

For pop-rock quartet We The Kings, it's all about staying connected – with each other, with their hometown roots, and especially with their fans. Named for hometown Bradenton, Florida's King Middle School where they first made music together, the band – Travis Clark (lead vocals, guitar), Hunter Thomsen (guitar, backing vocals), Drew Thomsen (bass) and Danny Duncan (drums) – has grown into one of the most engaging and exciting acts on the pop-rock circuit. Talent, ambition, and hard work have all played a part, but for We The Kings, nurturing the bonds between the band and their fans is what makes it all happen.

Their music has been licensed for the CW, MTV, Rock Band, and more, and they were nominated for a 2008 mtvU College Radio Woodie Award. Appearances on Jimmy Kimmel Live and MTV's TRL and Spring Break 2008 have further boosted the band's visibility. Constantly on the road, in 2009 they headlined their own tours as well as the 2009 Vans Warped Tour.

Since Warped wrapped up, the band has been in the studio recording their sophomore disc, produced by S*A*M & Sluggo (Gym Class Heroes, Cobra Starship, Metro Station) which will be released December 8. The infectious first single, "Heaven Can Wait," is gaining nationwide airplay, climbing the Billboard Singles chart, and has already reached the Top 10 on the Alternative Singles chart.

The title of the new release, Smile Kid (S-Curve), sums up the band's attitude. As Clark explains, "we are all about living life as happy as possible, and when you seem down, just remember to Smile Kid :)" Infectious high spirits and camaraderie energize their on-the-road videos and live performances. The joy they take in being on stage is palpable at every show; having fun and sharing that feeling with the audience is what it's all about. "It's always been based on friendship," says Clark, "which is why I think we get along so well together and why we're able to tour eleven months out of the year without wanting to kill each other."

Jonathon Fraser, also known as NORTHBOUND, comes from a different world than most of his peers. After years of DIY touring in the punk and hardcore scenes, Fraser has a very hands-on approach to everything he does, and this has allowed him to be impressively prolific since he began releasing music under the NORTHBOUND moniker in 2012.

Though it started out as an acoustic solo project, NORTHBOUND quickly evolved to its current hybrid state between acoustic and full band. This dynamic allows Fraser the flexibility to be the primary songwriter, as well as play shows as a solo act if touring bandmates are unable to join him.

Rise Up Lights is a Post-Hardcore/ Emo band from Northwest Florida, priding themselves on a very high energy, nostalgic sound. Consisting of vocalist Alex Arcari, guitarist’s Alex Gibson & Shannon White, bassist Brandon Mckendrick and drummer Dylan Pettit. Since 2016, things have moved very quickly for the band; From the first EP “A Sunny Place For Shady People” released on October 24 2016, followed by a music video for the single “Chemicals From Under The Sink” in February 2017. In 2019 the band announced their return to the studio, with the release of the single “Speaking in Tongues”. The band has self-produced the majority of their music, taking a DIY approach since their inception.

The group has toured extensively throughout the southeast region, and is quickly gaining traction, especially in their hometown. Through their high energy performances, and in your face songs, the group has managed to build a loyal fanbase. Since 2016, the band has received radio play, played at different festivals, been featured in press releases, and has opened for bands such as Red Jumpsuit Apparatus, Mayday Parade, Set It Off and Hawthorne Heights.