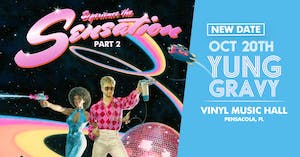 iCal
Google
Yung Gravy might be the most unique MC to emerge in decades, spitting smooth rhymes dedicated to MILF’s and filtering old school trap beats

Spitting smooth and slippery rhymes dedicated to MILF’s and filtering old school samples through gritty trap beats, Yung Gravy might very well be the most unique MC to emerge in decades.

Upholding the longstanding hip-hop tradition of competition, the Minnesota-born rapper recognized a void in 2016 when he first picked up the mic…

“I really felt like there was something missing,” he explains. “I wasn’t hearing what I wanted to hear, so I stepped up to the plate and actually started doing it myself.”

Inspired by everyone from OutKast, Nate Dogg, Curren$y, and Action Bronson to Patrice Rushen and The Blackbyrds, Gravy took to SoundCloud to begin releasing music. The first song he uploaded, “Karen”, quickly garnished new fans and stirred a palpable buzz online. His first EP, Mr. Clean, went viral on the strength of “Continental Breakfast” -- which cracked the 1-million mark on Soundcloud. Sandwiching a sample of The Chordettes’ “Mr. Sandman” between raunchy and raw rhymes, the title track “Mr. Clean” soundtracked countless fan videos and ignited 15.1 million Spotify streams and 6.7 million Soundcloud plays in under a year.

Throughout 2017, he prolifically unleashed a string of nonstop music, including Thanksgiving’s Eve, Yung Gravity EP, and Baby Gravy EP. Soon, he reached #1 on Indify and had labels knocking at his door. Gravy kicked off 2018 with the sizzling single “1 Thot 2 Thot Red Thot Blue Thot.”

Flipping the Dr. Seuss limerick upside down, the hook proves immediately infectious, but it’s the opening line that sets the stage for his formal arrival: “Now I’m off probation…and I’m fucking with some Asians.”

“I was at a house party in Georgia that got broken up by the cops,” he recalls. “We were accused of burglary, and I spent the night in jail. I got probation with community service. I was in the wrong place at the wrong time, so all of the felonies were expunged, but I still got charged with ‘Criminal Trespassing’ and ‘Underage Drinking.’ The day I got off probation, I was super hyped and inspired. This is my freedom song.”

“At the end of the day, this is all meant to make people feel good,” he leaves off. “This is party music, and everyone’s invited.”

Tiiiiiiiiiip began his career in 2010 as a producer / manager, co-founding “Audio Perm”, a 10-Person rap crew, which also included standout  member, Bobby Raps. Audio Perm garnered a substantial buzz locally, with multiple  local performances ALONGSIDE Kendrick Lamar, Ab-Soul,  Schoolboy Q, and a performance at Rhymesayers’ Soundset Festival. After the disbandment of the group in 2013, Tiiiiiiiiiip & Bobby forged ahead, with  Bobby SPEARHEADING what would be their next group endeavor, “TheStand4rd” with Spooky Black, Allan Kingdom, & Psymun, and Tiiiiiiiiiip as their official DJ. The group then headed to Toronto, to begin  a 2 month long super sessionwith The Weeknd producer Doc Mckinney, to work their self titled debut. The project was released to critical  and fan praise, and the group headed on tour soon after. The 10 date, sold out tour took them all across the country, including a stop in New York, with a surprise introduction by DJ Khaled, a longtime group supporter.  In 2015, Tiiiiiiiiiip began his tenure as backing DJ for Allan Kingdom, wholater that year would be flown to London,  where he would debut his collaboration with Kanye Westand Paul Mccartney Entitled “All Day”, live on stage at the Brit Awards. The song was released later that year and went on to be nominated for 2 Grammy Awards in that same year. Tiiiiiiiiiip & Bobby continued collaborating as well, including the creation of a monthly event series called  “DEQUEXATRON X000”, which sold out an unprecedented 10 nights in a row, in the record room at legendary venue First Avenue. The duo set their eyes on 2016, planning a collaboration with an unlikely partnerIn General Mills’ Hamburger Helper. They wrote, produced and  recorded the first song from the "Watch The Stove" mixtape project, which has since garnered over 10,000,000 plays, been featured on  several major news outlets, and nominated for a Cannes Lion award. 2016 also saw Allan and Tiiiiiiiiiip  touring extensively; a 33 date run with 16’ XXL Freshman Denzel Curry on his “2055: The ULT Experience” Tour, a 10 date “Allan Kingdom European Tour” and the “Ancient Future US Tour” w/ Proteje. Tiiiiiiiiiip has organizED and promotED events with national headliners, under the “Tiiiiiiiiiip Presents” banner, incl. dates with LIL UZI VERT, Blackbear, Playboi Carti, Soulja Boy,  $uicideboy$, Pouya, & more. Tiiiiiiiiiiip has been featured in VOGUE, FORBES, L.A. Times, Buzzfeed, XXL, Star Tribune, Lavender Magazine & more. Recently, he designed a full line of official merch for Juice WRLD, and was profiled in Vogue for their VogueWorld 100 feature. TIIIIIIIIIIP is most often DJing in his hometown of Minnesota, opening for acts such as The Isley Brothers, Travis Scott, New Edition, Future, Migos, Gucci Mane, Etc. TIIIIIIIIIIP will be touring with Yung Gravy & BBNO$ as the DJ for the "Experience The Sensation" Tour, Starting February 4th, 2019.